I don’t know how many of you are familiar with this little children’s song, but I’ve probably belted it out thousands of times in my life.  (Aaaaah! See?! There’s a reason I’m so crazy.)  This song is always a big hit with toddlers and preschoolers.  It’s one of those songs that day care teachers all across America sing when they see themselves losing all control of the class.  It gathers the faithful minions back together again. 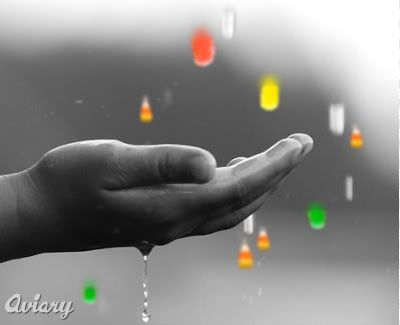 I’ve taken care of hundreds of faithful Barney watchers (screams and runs the other direction) in my day, and it was a constant on that show for years.  It’s one of the songs t hat my day care kids actually taught ME.   It was a constant on that show for a reason—kids LOVE it.  It’s like that ridiculous “Friday” song or even that perky little “Pockets Full of Sunshine” song.  It gets into your head, bounces around for a few days, and drives you crazy.
About a week and a half ago, I heard Logan making this “ah ah ah ah” sound to himself while playing with his radio.  It immediately reminded me of the “Lemon Drops Song” so I started to sing it to him.  The first time I sang it, he just stopped and looked at me as if I had completely lost my mind.  (Surprising, as this is coming from a child that LIVES with ME and should be used to my shenanigans.)
But he is my child, after all.  He was ALL for the crazy.  It wasn’t long before he was sitting there with his mouth wide open, trying to copycat what I was doing.  Soon he was giggling and swaying back and forth as I sang it.  I’m sure it was quite entertaining.
Loganquickly realized that this was supposed to be interactive.  He was supposed to DO something here.  He tried all kinds of things.  The first step was a sing-along.
“Lalalalala”, he sang…right along with me.
“This singing is fun, but just not altogether right”, he thought.
“She wants me to do something else here.”
Next, he started making the “ah ah ah ah” noise (How else does one explain this part of the song?) as soon I’d start singing.  He quickly realized that this was still incorrect.  He tried to add it to the end.  He knew this was still “wrong”, but I also think he knew that doing so would make me sing it again.  And of course, I’d oblige.
I mean, it did keep him out of things and his attention on one thing for more than 3 minutes, right?  That in and of itself is a feat with this one, I tell you!  We practiced every day off and on—three or four times a day.  Within a few days of doing this, he was soon adding it into the middle of the song in random places.  Improvement!
Three days ago he was adding it into the right place.  Of course, he doesn’t care about the rest of the song.  He just wants me to get to THAT part so that he can do his thing and then start over.  He gets so proud of himself and even dances as he does it.
I’ve been trying to get it on video, but the little stinker thinks the camera exists just to make funny faces and noises.  He doesn’t cooperate with me on this.  I’m going to try to catch him off guard when it’s sunny outside and I don’t have to use the camera light.  Maybe that will work.
He started playing pat-a-cake a couple of weeks ago and I squealed with delight.  He was interacting in nursery rhymes!  He loved to play them, but he just loved to watch ME do it.  I finally feel like we’re getting somewhere now.
He is definitely a bird that does things in his own time.  He is fairly advanced in his development, but he is not an “on cue” kid.  No worries, though—he has impeccable timing of his own.  I hope he holds onto that as he gets older because he is hilarious.
Take this morning, for example.  I was brushing my teeth and he was in his daddy’s arms breaking his neck to see around the corner and watch my reflection in the mirror.  When I was finished, I walked into the living room, bent down close to his face and asked, “Whatcha looking at, Mister”?  He responded back by showing me all of his teeth and saying, “shhhhh”.  Apparently, that’s what it sounds like when I brush my teeth.  Who knew?  I’m telling you, he’s a regular comedian.
I believe that all of those curses my parents put on me for my own behavior are going to come to fruition with Logan.  BUT he keeps me in stitches, this one.  And I used to think that I was the funny one of our little family.  I do believe that I have just been replaced. J  I’ll take second seat, Buddy.  Gladly.